Have you ever attended a Jellicle Ball? If not you’re missing out! Once a year all of the Jellicle Cats meet for this occasion, and this year at Theatre Royal Wakefield you have a chance to attend for yourself. 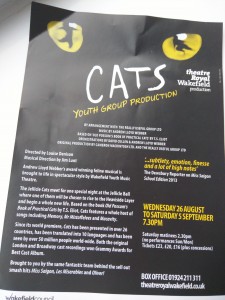 From the moment the lights go down you will find yourself mesmerised by an all-singing all-dancing tale of various Cats. From an audience point of view, it was very easy to forget that these were actors and not actual cats that you were observing. The actors had the feline movements down to a tee, although one thing to be positively sure of is that they were far from sounding like ‘a bunch of Cats’.

CATS allows us to meet several different Cats, each with their own characteristics. Both the music and choreography allows them to explore their anthropomorphic qualities and tell their own tale. Every theatre go-er will have their favourite cat. The one that they eagerly anticipate and know all the words to their showstopping hit, the one who’s tale makes them howl with laughter or the one who’s story evokes a whole range of emotions that they can relate to.

Musical Director, Jim Lunt, did a fantastic job with the music and the singers did not once hit a wrong note. I found myself sat in awe at how much raw talent these young actors had. My favourite scene of the night was ‘Magical Mr Mistoffelees’, the song was so catchy and the Cat himself dazzled the audience with his solo dance full of jumps and turns which was accompanied by multiple fireworks. Another Cat worthy of the cream was ‘Glamour Cat’, Grizabella, whose breathtaking rendition of ‘Memory’, in the second half of the show, caused many people surrounding me to tear up. The song was performed with powerful emotion and every single note was perfect.

Mungojerrie and Rumpleteazer’s performance of their self titled song was another one that had me singing along and grinning. Their song brought an air of mischief and silliness to the show which was enjoyed by old and young alike. This number was accompanied by an energetic, and in some places, acrobatic dance routine that had your eyes fixed on following these merry Cats from one side of the stage to the other.

Rum Tum Tugger also has a self titled song which describes his unpredictable nature and his love of the limelight. All of the kittens in CATS adore him and so did the audience, who loved his singing and cheeky facial expressions which portrayed his character perfectly. As well as singing about himself, Rum Tum Tugger plays a big part in the rest of the musical. Particularly as he is the voice behind ‘Magical Mister Mistoffelees’, a song about magic and intelligence.

Once each Cat has had their chance to perform, it is up to wise ‘Old Deuteronomy’ – the oldest cat of them all – to select one of them to be reborn. But who will he choose?

You still have chance to meet all of the above mentioned Cats and many many more! ‘CATS’ performed by ‘Wakefield Youth Music Theatre’ is still available to see until Saturday 5th September. Tickets are from £16, which is a little price to pay for such a ‘purrrfect’ performance.

I'm Bethany Jackson, I love to read, write and post things on the web. This is my personal Blog where I share my ideas.